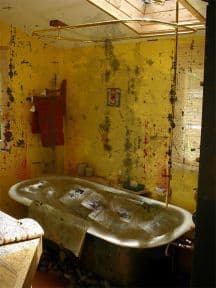 There recently was a thread about awful room-mates, along with pictures. I have my own experience.

Housing complex. The units are basically small cottages, made for two room-mates, with a common area and attached kitchen, a small storage closet in the common area containing water pipes leading to Suite A’s bathroom. The two private areas of the suite contained a private bedroom, a sliding glass patio door, and a private bathroom. Sounds idyllic.

My roomie, Jed, liked to throw parties. He liked tarantulas, too, and kept six.

For the sake of saving my effort in recounting this story, here is a basic rundown of the chaos:

This run-through of incidents is going to be kind of terse, because I’m working off of a check list I made a while ago.

During our stay together, my roomie:

I was pissed at this point. He refused to clean or take care of all of the messes listed above, so I ended up cleaning them, but keeping an hourly log and catalogue of what work I did and worked out a bill, which I sent to him. I was tired of cleaning feces out of our refridgerator, finding turds in our crisper drawer, shit on the stovetop, vomit on the carpet, vomit in our potted plants, vomit on the grille of our television set, urine on the carpet, urine on the kitchen floor seeping behind the refridgerator, dead animals in our oven and freezer units, and bags of feces hidden in our light fixtures.

Have you ever had to move your refridgerator out of its little nook to get behind it to clean urine mixed with whatever the fuck lurks behind a refridgerator in the first place?

After sending him the cleaning bill and getting a refusal of payment, I took some of his stuff, dumped it in a storage unit across town, and held it until he paid me back. He stole some of my stuff in retaliation, but I called the cops and repossessed my belongings. He was unable to articulate to the cops that I had some of his shit in this exchange, so I ended up basically getting my shit back while he had to be put in their car to cool off.

Upon retrospect, I think maybe he became mentally ill after losing his girlfriend, and not being able to part with his feces was part of his illness. This is purely speculative.

He wasn’t poor. He was from a wealthy family. They don’t come into the picture, though.

This is where the sealing begins. Put a datemark right here, because this is where shit gets crazy.

I had had enough. I bought a minifridge, a plug-in stovetop, two padlocked footlockers, a wooden bar, duct tape, a remote-control car, and an external padlock. My private area had two entrances… Here, I best sum up my little fortress in this post I made in another thread:

Actually, upon reflection, I really want to share how I kept my room-mate out of my private area. It was dubbed the “Home Alone” security system.

I had two potential entrances to my private area, a sliding glass patio door and a regular door to the common area. I secured the common door with a padlock on the outside which was really just for show. The inside was barricaded. At the bottom I had a rolled up towel, and I sealed the rest of it with tape to avoid smell or other chemical assaults from the common area. I packed against the door with my king-sized bed, which was in turn secured from being dislodged by a bookshelf full of weights and books. Even if he got through the padlock, he would not have been able to open the door without busting it in two. The top half of the door was unsecured; I was worried he might break the door and gain access, so when I siezed his stuff I had it put in public storage across town.

Now the sliding glass door is where the home alone shit comes in. It had a lock, but it was nonfunctional and only accessible from the inside. So in order to secure the door while I was away, I got a remote controlled car, attached it to a string which was secured by a fisheye screw at the top of the door, and tied to a security bar which would drop into the tread of the sliding door, preventing it from being opened.

Anyone who has a sliding glass door would know how this works, but if anyone needs further explanation, I’m happy to furnish it.

So when I came home, I would whip out my little remote control, make the RC car run off and lift the bar, then gain access to the apartment. To prevent this system from being discovered, I papered the inside of the sliding door with butcher paper, and I ran a wire outside of the door in an obvious manner, so that the roomie would think that this wire somehow, if tugged correctly, would undo the lock. To my knowledge, all of his attempts to get inside my apartment were by messing with this wire, which was attached to the handle of an antique coffee grinder and a paint can. If you tugged it, you’d get a wierd uneven resistance as the handle crank turned and the paint can danced, which added to the illusion that this wire was some secret way of ingress.

I heard this account from the neighbors, because it occurred while I was away, but apparenty he had lost his front door key, had some kind of intestinal problem, and had to take a shit really bad. All of the neighbors he knew he had already hit up for toilet access and been refused by this point. So he’s swearing like crazy and yanking at this wire, and bashing against the door in a frenzied desperation when the neighbors call the cops, reporting a B&E. When the cops show up he’s taking a shit in the bushes just outside my window. I fucking hate him so much.

I think he went crazy and lost all his friends at some point, because around the time I barricaded, I stopped hearing parties. In fact, I stopped hearing anything from the common area of the apartment, except for the occasional formless moans and thumping. I don’t know precisely what went on in there, because I mentally washed my hands of the whole area. I did, however, start smelling odors. I taped up my door. I know it wasn’t smart to do things like this, but I was just fucking sick of dealing with his shit. I didn’t call the landlord or anything, despite the fact that I knew he was destroying things over there. After cleaning so much of his shit up, I just wanted the universal god of justice to see what a wreck the place would become without my presence.

Forgive me for being a little spotty in my descriptions after this point. What I do know of what transpired over there I can only reconstruct from forensic evidence, what precisely was destroyed, what commmon friends have told me in their accounts, and two forrays over into the waste zone over the next two months. I essentially didn’t even see the front door of our apartment during this time.

Support This Page By Ignoring These Ads

We here at the management of dipstick websites LLC have decided to not show ads because apparently this is getting flagged.

I wonder my site and all 100 people per month will drop to an even smaller trickle now that I have cost the great overlords a few pennies?

Support This Page By Ignoring These Ads

We here at the management of dipstick websites LLC have decided to not show ads because apparently this is getting flagged.

I wonder my site and all 100 people per month will drop to an even smaller trickle now that I have cost the great overlords a few pennies?